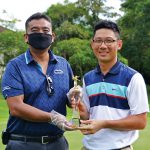 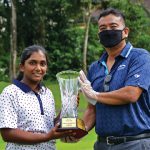 After a nail-biting 2-holes sudden death, Teh Chew Choong, known to friends as CC Teh, cemented his position, playing over two-days, He defeated his closest challenger Jack Chew, with a 20-foot tricky birdie putt on the second sudden death hole; with gross scores of 80 and 74 for total of 154. Jack Chew stood in the first-runner position with a total of 154, while last year’s club champion Tan Chee Kean, claimed the overall second runner-up position with a total of 158.

Representing the women, 15-year old Sharni Nagalingam, stole the limelight as she was crowned the youngest club champion, by defeating the ‘evergreen’ Sally Choo and last year’s club champ Yukari Kimeta with total of 182 strokes. It was a close battle but Sharni displayed guts and determination to hold-off all the experience of Sally Choo to join CC Teh as the champ.

Sharni said: “Last year’s club championship was my first tournament and it was about gaining experience – this year, my aim was to win. I am happy as I have defeated last year’s club champ and experienced fellow players who competed with me. I was not worried about my competitors but more about the course, as it’s not an easy one. I’m glad, with my father’s support, I’ve been able to win this championship and I will be participating in the Junior Golf Circuit 2020 next weekend.”

Certified Instructor of Junior Golf Academy and tournament official, Sunny (AGTF/WGTF) said: “It was a good tournament overall. I enjoyed watching Sharni, taking on the other experienced players, as she kept her composure even when the lead was cut short – she stayed to her game plan to become youngest club champion ever.”

Sunny added: “CC Teh who started the game with two strokes behind overnight leader, steadily climbed up the leaderboard, with scores tying with Jack Chew at the end of the round. He kept his composure even when his driver almost went Out of Bound (OB) at the first sudden death hole. He managed to square the hole and proceed to the next sudden death hole and eventually clinched the winning title to erase the memory of going down the previous 2018 club championship also in sudden death.”

When asked about the course set up, he explained: “Though the starting time for the final round had to be delayed due to adverse weather condition, the course condition was in a great shape, with bunkers prepared in play-only for this tournament to provide a championship playing condition for all levels of field players.”

The event teed off without a hitch with 59 men and six women players, with social distancing protocols and rules to keep everyone safe, from digital scoring, 1 metre distancing rule between players, flags remaining in the hole and no rakes in or around bunkers.